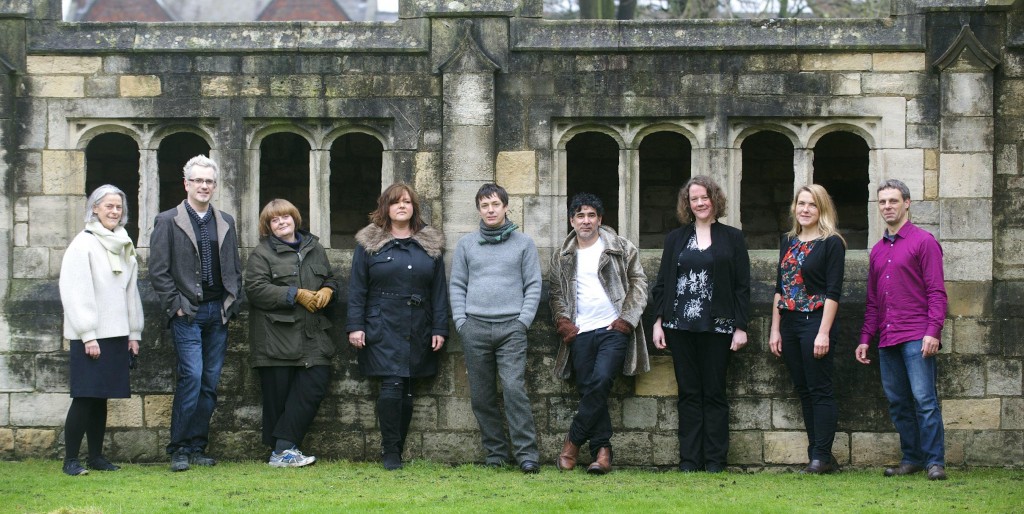 Who has scattered seeds across the city, shuffled into corners muttering a way through old walls? Who are the York Curious way-makers and diviners, maintainers of the ancient conduits and ghost banners?

Curiouser curators Lara Goodband and Hazel Colquhoun have been wandering the streets and taking care of the overlooked and locked up, the backwaters off the beautiful track, finding the right environments for artists to grow their work.

I’m a poet and prose writer who enjoys making texts that people can encounter outside the covers of a book.  I’ve collaborated with sound artists, wood carvers, graphic designers and performance artists to explore the strangeness of language and the history of places.  For York Curiouser I’m exploring the in between spaces – the snickets, passageways and yards… [more…]

Susanne Davies is based in York.  She recently completely a major commission for the new City of York Council offices. Her favoured medium is embroidery thread which she uses to create delicate, thoughtful artworks. She is creating a new work for the grounds of the Merchant Adventurers Hall. [more…]

Sally Greaves-Lord is a textile designer whose work is in public collections in the UK, Europe, US and Japan. She has exhibited widely throughout Britain and is regularly commissioned by the Church of England and the NHS. Sally is based in North Yorkshire and is producing a new work for York Curiouser which will be sited on the historic walls near the Quilt Museum. [more…]

Matt Hawthorn’s practice includes performance, new media, architecture, writing and curating. He works throughout the UK and internationally. For York Curiouser, he is working on York’s hidden river, the Foss [more…]

Anna Heinrich and Leon Palmer have worked in collaboration since the early 1990s. Their artworks range from photographic and light installations to large-scale projections and public art interventions.  Much of their work is site-specific, with locations including schools, National Trust properties, hospitals and sea-front promenades.

They have made a new site-specific work for York Curiouser at the Red Tower. [more…]

Janet Hodgson has shown her work both nationally and internationally, including at Tate Liverpool and the Serpentine, London. She is concerned with constructs of time and place. Her work is multi-disciplinary and often collaborative. She uses the site and its history as the starting point for creating new work. She has created a work at Fishergate Postern Tower. [more…]

Sound artist Damian Murphy has recorded sounds from the City, working with the words of John Wedgwood Clarke, and capturing the acoustics of aspects of the architecture and environment of York. The installation is found in the courtyard of Kings Manor – an impression of York designed to linger long with the listener.  [more…]

Jacques Nimki has exhibited nationally and internationally including at the Ikon, Tate Britain and Tatton Biennial.

He has created an installation at the National Centre for Early Music by inviting people to dontate their bags and stories. [more…]

Karen Thompson is a ceramicist based in Scarborough.  She has created a multiple porcelain sandwich for York Curiouser. [more…]