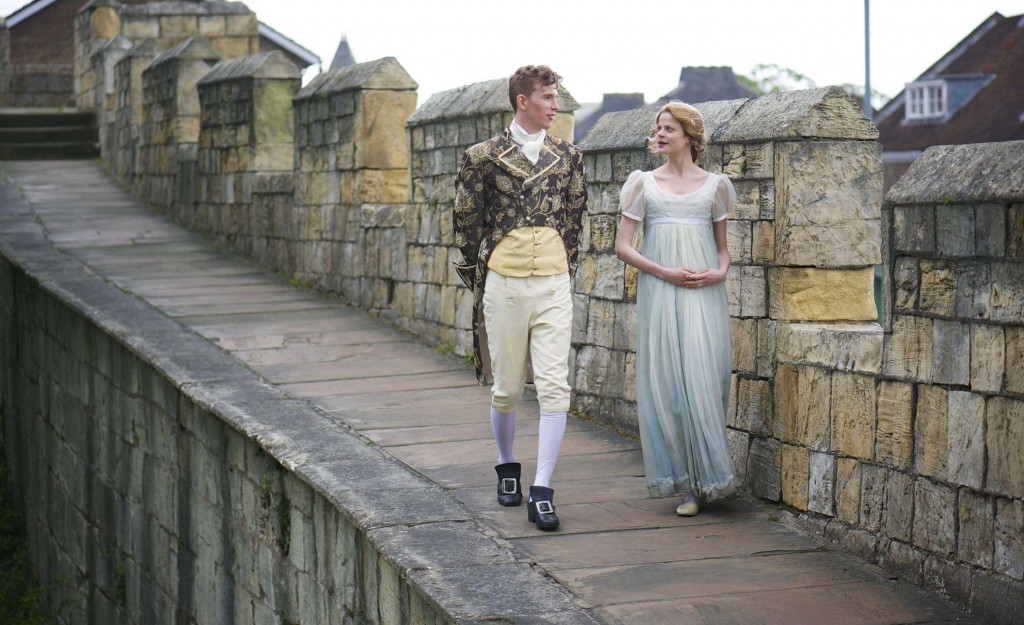 From “The Postern” (Photograph Tony Bartholomew)

Janet Hodgson has shown her work both nationally and internationally, including at Tate Liverpool and the Serpentine, London. She is concerned with constructs of time and place. Her work is multi-disciplinary and often collaborative. She uses the site and its history as the starting point for creating new work.

Janet Hodgson has created a new artwork called The Workshop of Historical Correction where, Janet says, ‘the forgotten, out-of-date, wrong or missing, misguided histories from York’s past appear to be being stored and reworked ready to go on display once again.’

The installation also includes a short film, The Postern with choreography by Lea Anderson, filmed in the early 16th-century Fishergate Postern Tower on York City Walls and projected on its top floor.

The film shows a Georgian dance lesson where the students learn a new quadrille specially composed for this occasion. Their instructor is Mary Wigman who choreographed the dance routines for Cabaret Voltaire. The dancers work hard to achieve the perfection she requires while a choir boy provides the music for the quadrille. He sings a Dada composition of a libretto with words quoted from Drake’s Eboracum. A separate film of the choir boy is shown on a single monitor on the third floor of the tower.

Janet describes her inspiration as: “One of the stories about the Fishergate Postern Tower was that in the Georgian period, there was dancing and singing for private assembles. It’s not certain that this is fact. However, taking this story at face value I am making a costume drama that shows the remaking of this story, ready to go out and take its place amongst the histories of York today.’

Janet Hodgson’s work has been shown internationally at Oakville Galleries Canada, Kino Babylon Berlin, Videoholica, Varna, Bulgaria, Museo Civico Di Rovereto Italy, Industrial  59, and Ural Industrial Biennial iEkaterinburg Russia. She is well-known in the UK and exhibitions include The Whitworth Art  Gallery, the Bluecoat Gallery, the Serpentine Gallery in London and Tate Liverpool. Janet is also a lecturer at U.C.E in Birmingham, Wimbledon School of Art and the University of Kent. She regularly works with archeologists including at el kurru in the Sudan, at Stonehenge and with Canterbury Archeological Trust.